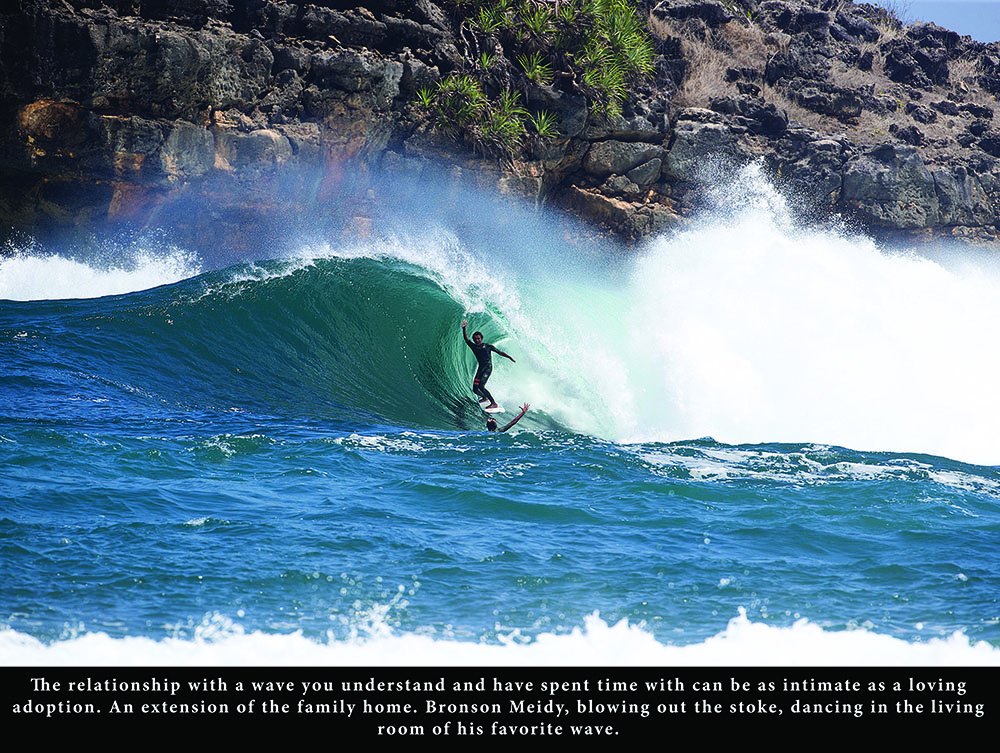 If you were just outside of Las Vegas Nevada, at a secret military station in the desert, and you were at the controls of a US spy satellite and you happened to be a surfer, imagine what you could find. If your satellite were soaring over, say, Java and you were curious about a surf spot you had seen in a magazine or online and you had used some simple research to get the coordinates, you might look over your shoulder to see if anyone in the air conditioned shipping container you were working in was looking. And then you might surreptitiously divert the controls to check this surf spot out real quick like. Here is what you would find with your joystick on the high tech screen before you. On a clear day, from your outer space vantage you would see a large green island, a somewhat narrow island, running basically east to west, almost kissing the island of Bali to its southeast. Moving in you would see the gray, mushroom columns of smoke issuing from a few volcanoes to the South West. 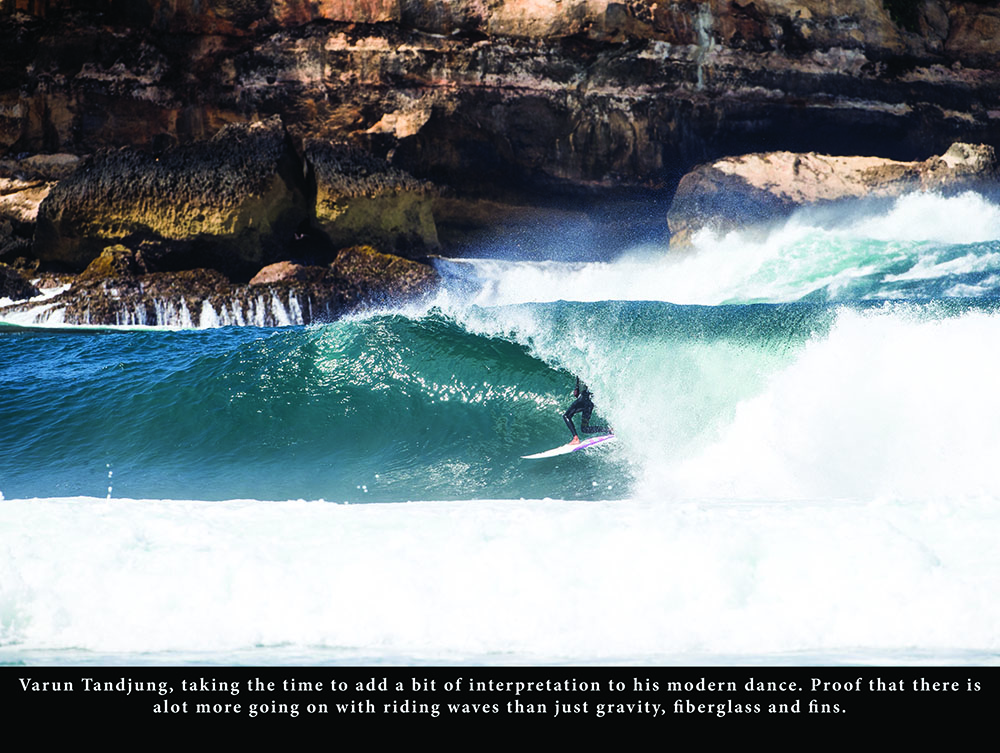 Closer in and Java would take on a relief. No longer a green carpet, but now a personality of a place. Still kelly green, but now strangely foreboding with its vast impenetrable jungles. And yet, at this point looking soft enough for a naked human being to land on without injury. Closer, as this jungle became hillocks and contours and copses and rusty bare patches, you would see how untrue that last thought was. Java is now a primal looking place. Elemental. Survival driven. Closer, as you vector over to the coast, the first signs of a thin white border drawn like fringe between the green of land and the cobalt blue of the Indian Ocean. Wave action. Moving closer, you would see what look like settlements more than towns near the island’s bays and you would see the first signs of ocean movement as it continued its eternal chewing away at the land.

This chewing making the coastline look rough and tumble, a craggy meandering of sharp pointed headlands and bays and coves and covelets. Still moving in you would start to see small tan frown shapes at the base of some of the coves and bays. Sand. Down turned crescents of it. A series of frowns on the edge of the island, fed by the numerous serpentine rivers and creeks and waterways that you can now see glinting like polished knives in the noon day sun. Closer still and you catch your breath when you recognize actual swell lines and swathes of sweeping whitewater. This is home territory to your mind and you scrutinize the sea for the tell-tale combinations of moving swell and triangles of whitewater. Or moving white bows along the inside of a headland or cove that reached into the sea. Waves. Waves. You keep moving in on your coordinates and a small world begins to reveal itself. 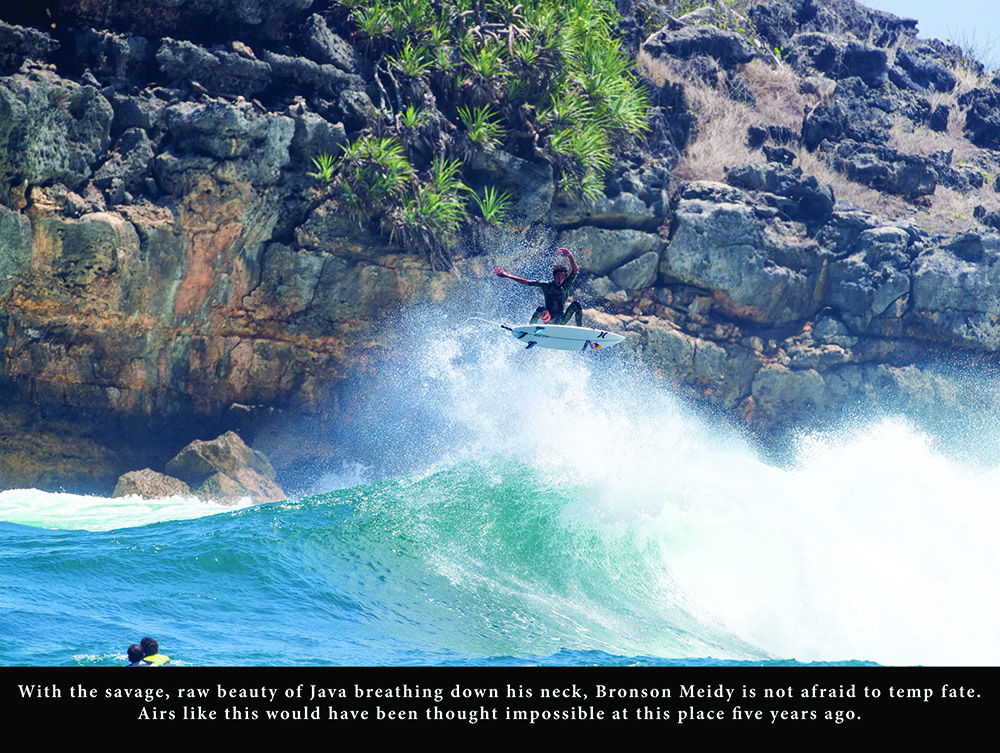 At first the size of model train set you spy the grid of small burg hard against a broken toothed bight in the coast. You can even make out a compound with a teal colored spot that marks a swimming pool on top of the hill that faces the bay. Closer, to the water, two large barrier rocks set like raw gems atop a small bay with a fingered headland to the east. Eager, you go closer and see two oblong fields of laced whitewater with a blue swirling rip cutting them in half on its way out to sea. Closer. A set of waves move through, refracting in and around the bay in a chaos that soon makes sense. Then the telltale sign of a wake left behind one of these waves. You stop it right there. Right. There. Surfers. So far away and yet so close. You zoom in to max. You can make out bodyboarders and surfers scrambling for a set wave. And two surfers, brown as coffee, sauntering down the beach for a go-out with clean, white boards under their arms.

You can imagine the sounds of the place, so you put them in your mind and the whole tableau becomes a complete experience. Live. Happening. You watch it all, drinking it in, watching it to the limits of the spy satellite’s capability, until the satellite you are controlling can no longer stay on the coordinates. Until the satellite sets over the blue horizon like a tiny aluminum sun. You take your headset off. Squeeze the bridge of your nose between your thumb and forefinger for long seconds. You breathe deeply. Once, twice. Once more. You get back to work, distracted, envious mostly of those dissipating snake-like wakes that you saw following closely behind the moving waves. You are back to doing your duty but envious of those beings on the sea. Wondering what drove you so far from home.

Varun Tandjung and Bronson Meidy, fresh from cooling off in the swimming pool of their family villa on top of the hill, saunter down the Javan beach with their boards under their arms. Pasir Putih. The white sand of the beach making them squint and sweat. The alpha males of the line-up, they can afford to take their time. Living atop the hill in luxury. The quivers of shiny new boards, the stickers, their lives preordained for surfing. Purpose built since birth. They huff to each other about how many body boarders are out, but no worry, everybody gets along. The wave off the rock looks like it’s handling the tide well and the rip is going to make the paddle out easy. They both make their way to water’s edge fetlock deep in the sand. And another wave rears up on the reef against the offshore winds. And the sky above has nothing to do with it at all. 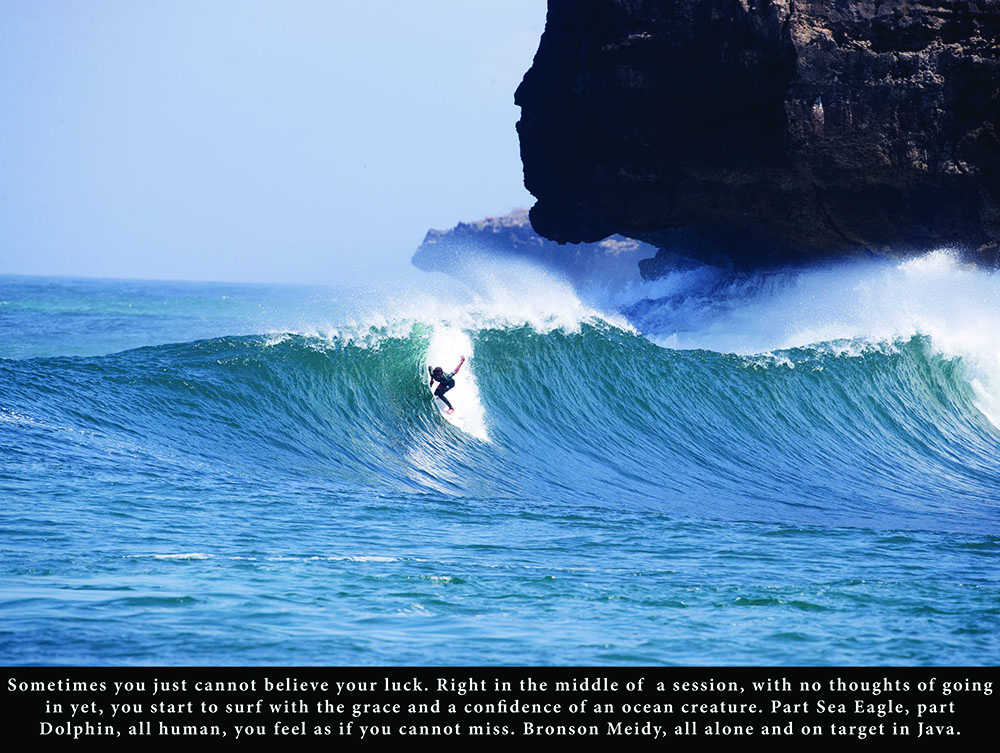 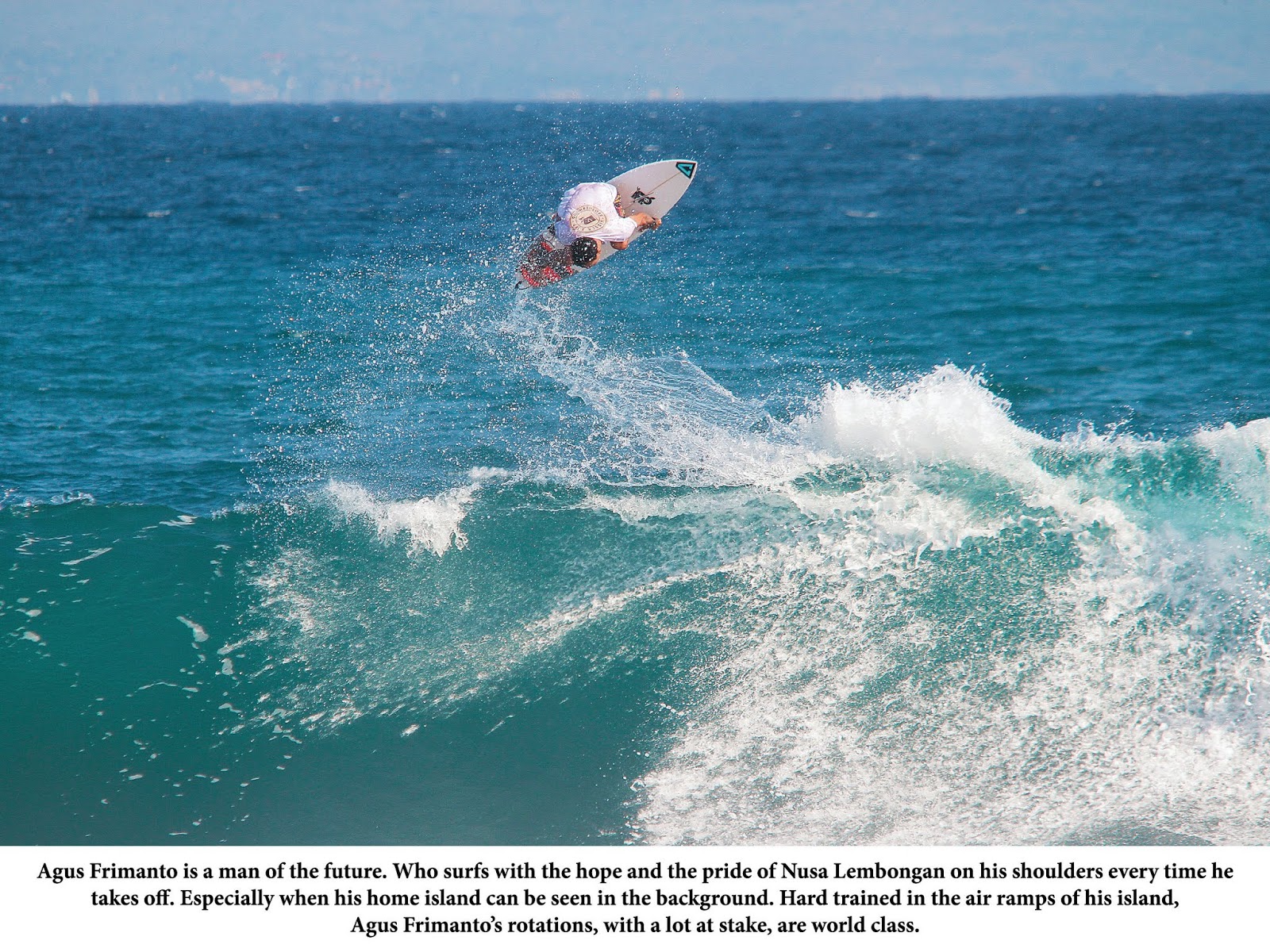 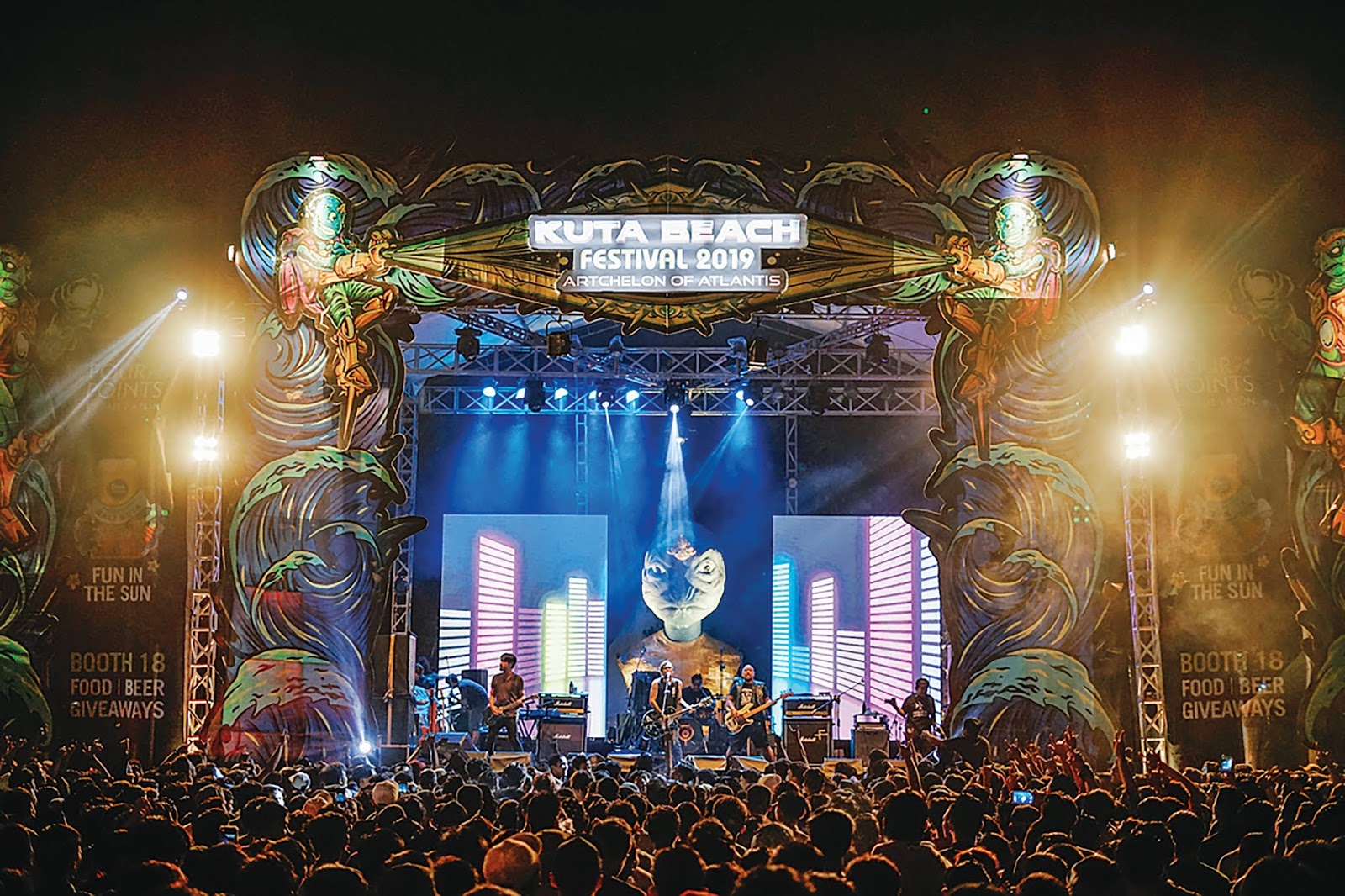